The City of London – a walk through geological time
Described by Dr Matt Loader, Natural History Museum for the Geologist’s Association’s Festival of Geology 2020.
The walk is designed to take you through geological time, from some of the world’s oldest rocks to some much more recent examples. The walk has five stops and, depending on the length of time spent at each stop, should take not more than 1 hour to complete. It begins at London Bridge station and ends in the pedestrianised Plantation Lane.

London Pavement Geology
This website has an interactive map of London showing the building stones of individual buildings: http://londonpavementgeology.co.uk/ 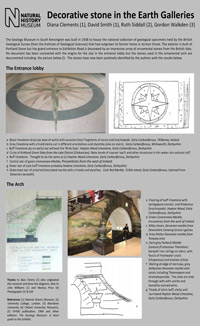 Decorative stone in the Earth Galleries
The Geology Museum in South Kensington was built in 1938 to house the national collection of geological specimens held by the British Geological Survey (then the Institute of Geological Sciences) that had outgrown its former home in Jermyn Street. The exterior is built of Portland Stone but the grand entrance to Exhibition Road is decorated by an impressive array of ornamental stones from the British Isles…

Presented for the Geologists’ Association Festival of Geology 2020 as a live trip during the Covid pandemic. In the event the trip had to be cancelled because of the second Lockdwown. Instead detailed walking instructions and information on those chosen have been written up. The tour is based round the monument to George Bellas Greenough in the 200th anniversary year of the publication of his geological map and many of the other tombstones selected are related to this event.

Devised by John Henry of the History of Geology Group and Diana Clements of the London Geodiversity Partnership with some details of the descriptions of the chosen heroes taken from publications by Eric Robinson and Henry Vivian-Neal.

The City of London is in an area that has no indigenous building stone; its underlying layers of sand, gravel and clay are poorly consolidated materials that are not suitable for use as building stones.Despite this, stone has been used as a major construction material in London since Roman times. The building stones of London takes you on a journey from AD 200 to the present explaining what materials were used in some of London’s great buildings.

Building and decorative stones: heritage as a teaching and learning resource
Building London – A summary of building stone resources in London
(October 2014 version)

It is often difficult to observe geology directly in a built environment. However, in London we have a wealth of building stones, interesting cemeteries and geological collections which can help in our understanding of the principles of geology and the properties of the stones used in the buildings. There are also walks that illustrate how important geology was in influencing the building of London.

Geology on the Underground

Open University Geological Society members are actively on the lookout for ‘Stone on the Underground’. If you know of any stations where decorative stone has been used, do please contribute by contacting underground@lougs.or.uk.