The LGP has been involved in the design and content of various interpretation boards in London and these can be viewed below:

Charlton laminates for steps can be downloaded here 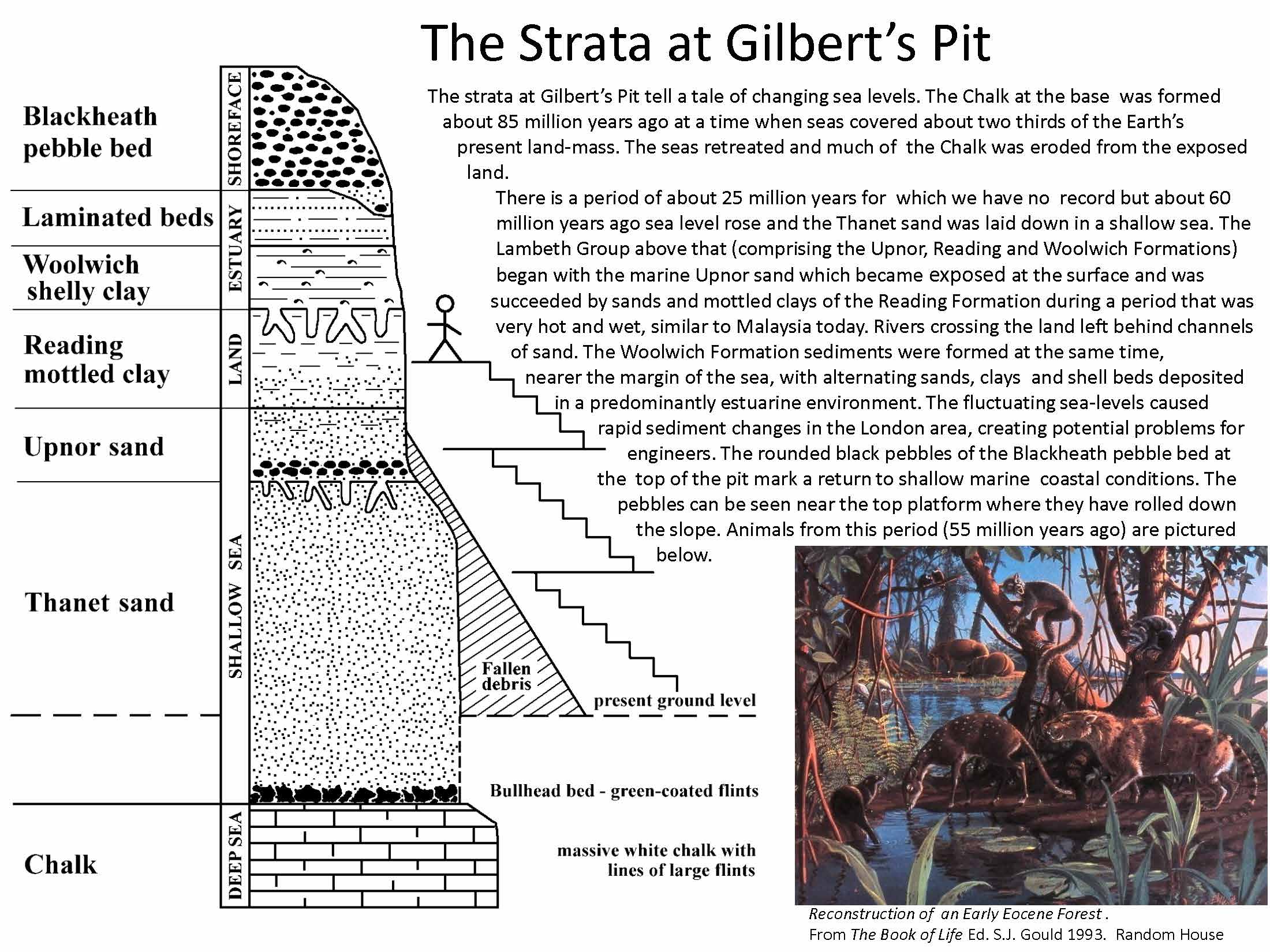 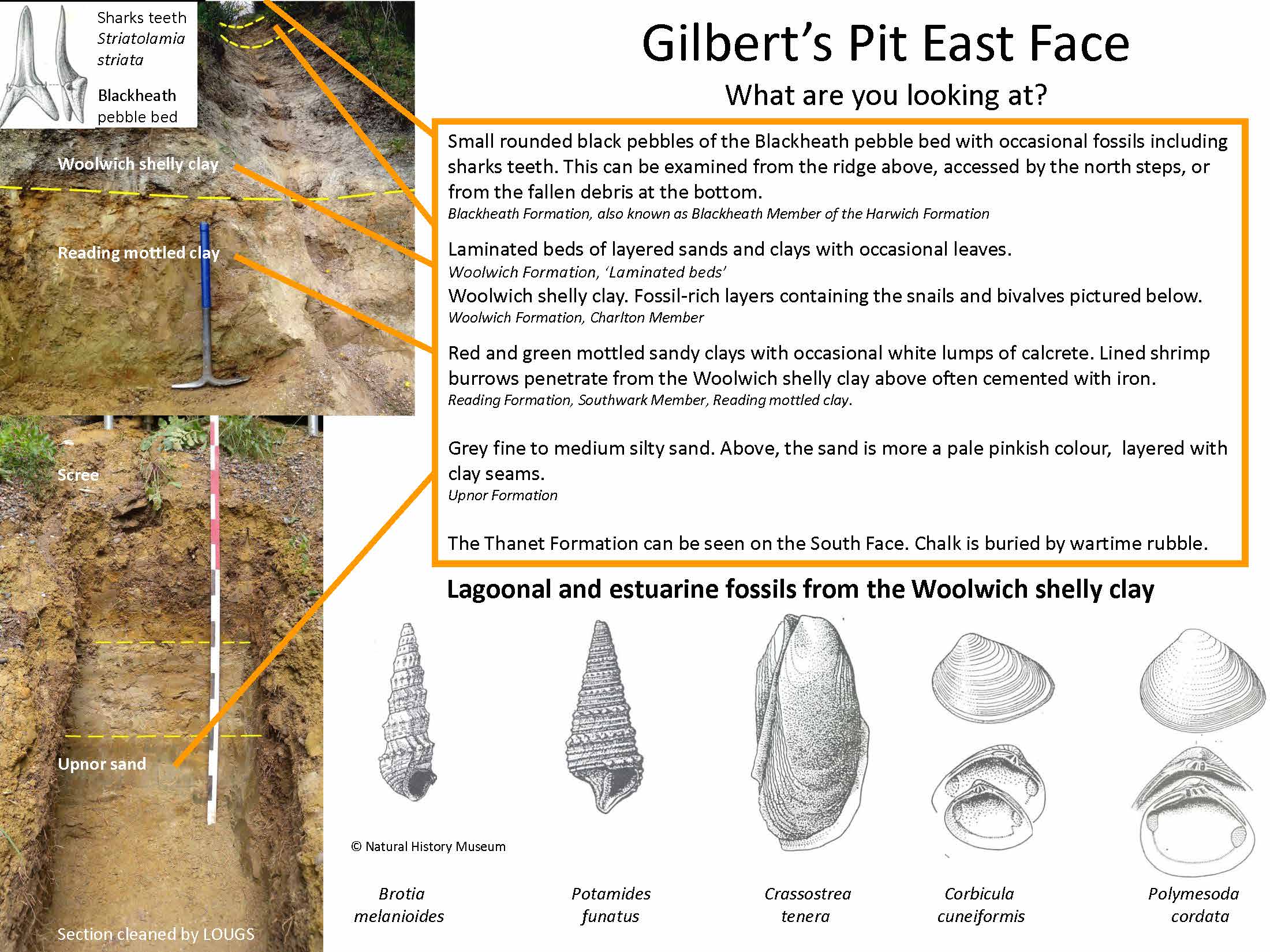 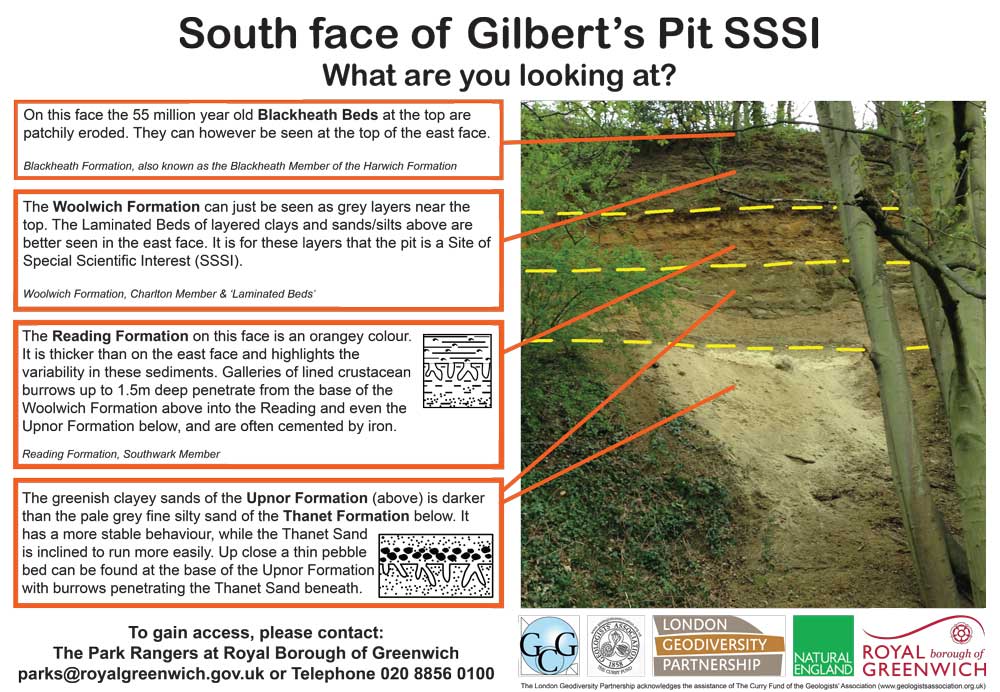 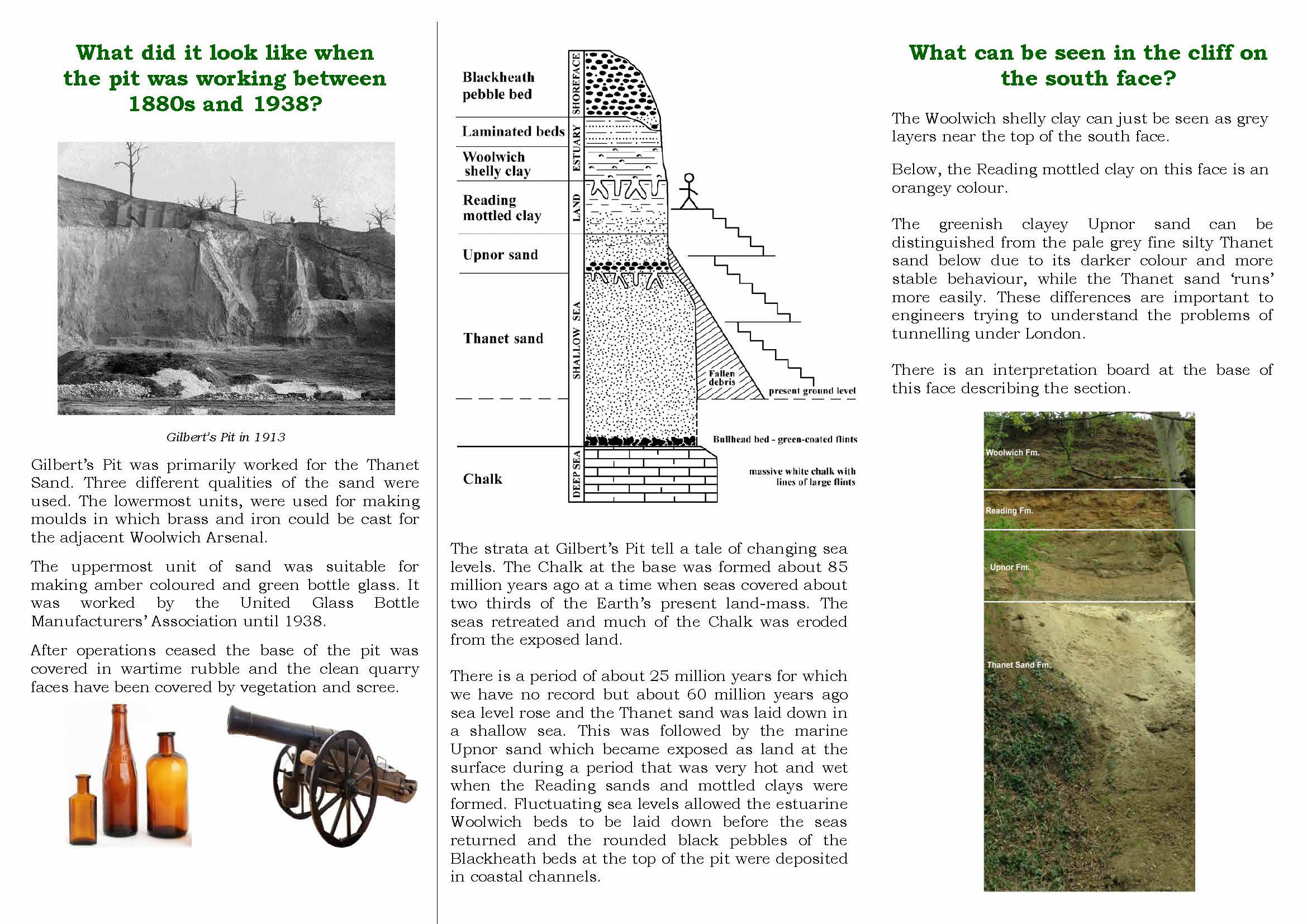 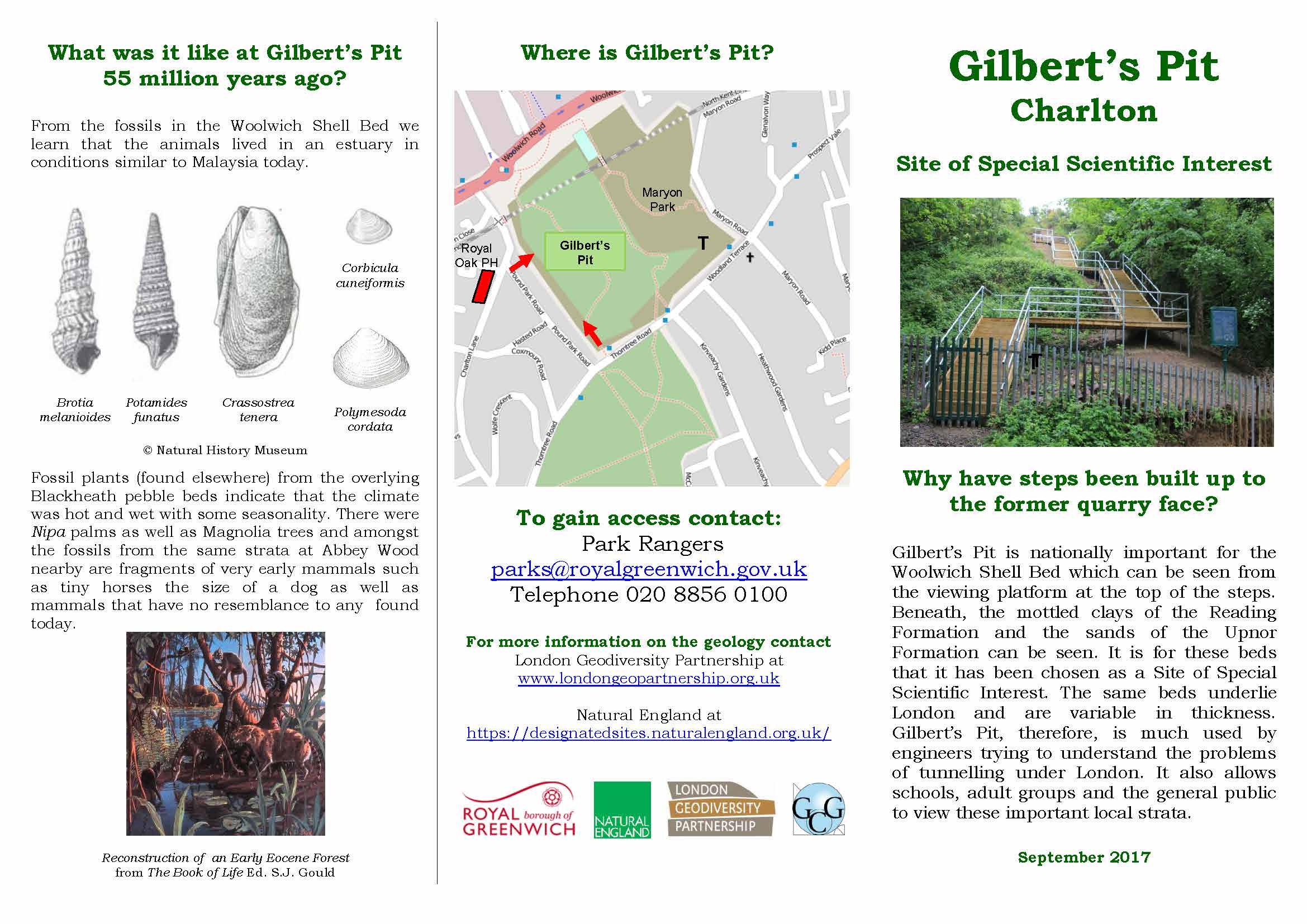 The Geology of Erith Park

The information board can be downloaded here 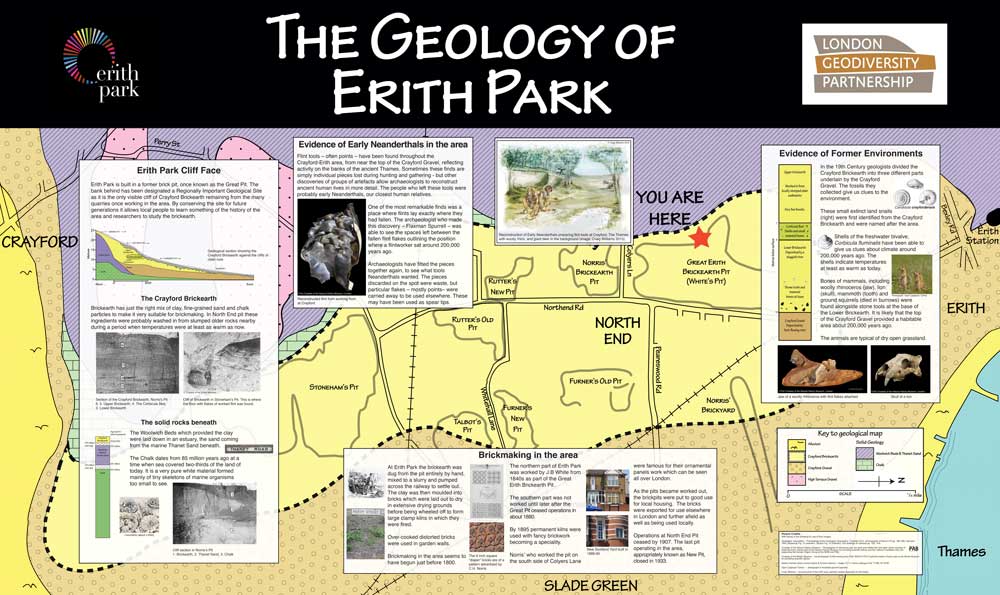 These boards cover the following topics (please click on the links to see the boards):

As the name suggests, Sandy Heath is underlain by sand, named after the main outcrop at Bagshot in Surrey where it was first described. Bagshot Sand was laid down in a shallow coastal sea about 50 million years ago. Most of this sand has since been removed by erosion although it still caps the London Clay on the high ground of Hampstead Heath, Harrow-on-the-Hill and Epping Forest.

The sand is unsuitable for mortar, mainly because of its high iron content, but over the centuries it has been put to various uses such as sprinkling on floors of mediaeval houses and filling hollows and boggy patches in roads before they were cobbled or tarred over. On the Upper Fairground area, to the south side of Spaniards Road, it was used for filling sand bags during World Wars I and II. The hummocks on Sandy Heath today are the result of a more intensive usage. In the 1860s Sir Thomas Maryon Wilson was thwarted from building on the Heath so instead he dug it up and sold up to thirty cart loads a day to the Midland Railway for a new track running out of St. Pancras. Within this small enclosure two trees still stand that pre-date the quarrying, all the others are woodland that has re-established itself since quarrying finished and now provide an interesting area of the Heath. 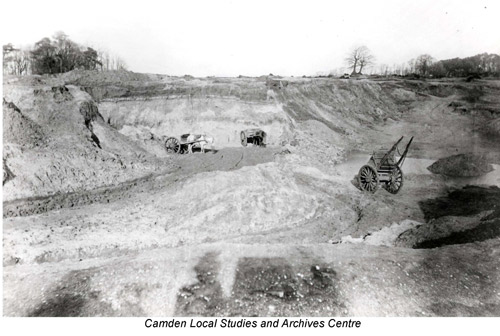 Brick-making on the Heath (on Viaduct Bridge)

The pond beneath the Viaduct was partly created from the hole excavated for a brick pit in 1860s-1880s. The Viaduct itself was built across the small tributary that supplies the Hampstead branch of the River Fleet and was the beginning of Sir Thomas Maryon Wilson’s proposed development at the top of the Heath. Happily he was prevented from continuing with his project so instead he laid railway tracks on the road from South End Green and used these to exploit the clay for brickmaking.

London Clay, as the name suggests, underlies most of the London area. It was deposited as mud on a marine shelf about 52 million years ago, supplied by rivers discharging from a coastline, probably in the Midlands. It is thought to have been laid down under semi-tropical conditions similar to those in Malaysia and Indonesia today although some seasonality has been deduced. As the London Clay basin filled up the sediments became coarser and the alternating sands and clays at the top are known as the Claygate Beds. These sandy clays are particularly good for brickmaking and have been exploited all around the hill on which Hampstead Heath sits. Chalk and ash were imported up the hill to mix with the clay which was then moulded into bricks and fired on the spot in large ‘clamps’. The finished bricks were then transported back down the hill to South End Green. It is hard to imagine the foul smell of sulphur in this now pleasant spot. 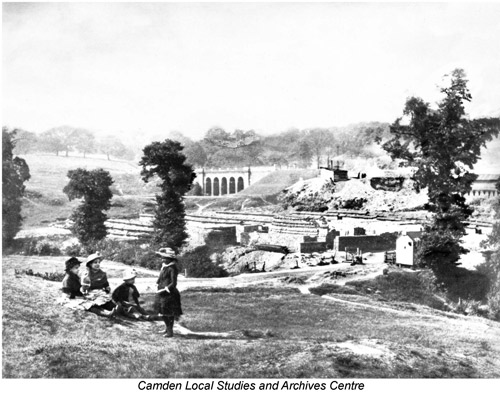 Spring lines on the Heath (by the newly-constructed pond just up the hill to the west of the Highgate boating pond.

This pond was created in 2010 around a natural spring emanating from a line encircling Hampstead Heath. Spring lines are governed by geology and occur where a clay-rich layer is overlain by a sandier layer. At the top of Hampstead Heath are the Bagshot Sands, laid down close to the coast about 50 million years ago. Rainwater percolates through the sands until it meets with the more clayey Claygate Beds beneath. Notable springs from this junction would once have been seen at ‘The Old Bath House’ at Kenwood House and the wells that supplied the Health Spa on Well Walk in Hampstead. The water is very iron-rich and was supposed to be a cure for all manner of ailments. This upper spring line provides the headwaters of both the Hampstead and Highgate branches of the River Fleet which runs through the ponds below and eventually enters the Thames at Blackfriars.

The lower spring line is where the Claygate Beds, meet the impermeable typical London Clay (about 52 million years old). The water from this junction is a pure soft spring water that was formerly supplied to the people of Hampstead from Shepherd’s Well in Fitzjohn’s Avenue. Here were the headwaters of the now ‘lost’ River Tyburn, on the same spring line that feeds this small pond.

Highgate Wood – on display in the Visitor’s Hut 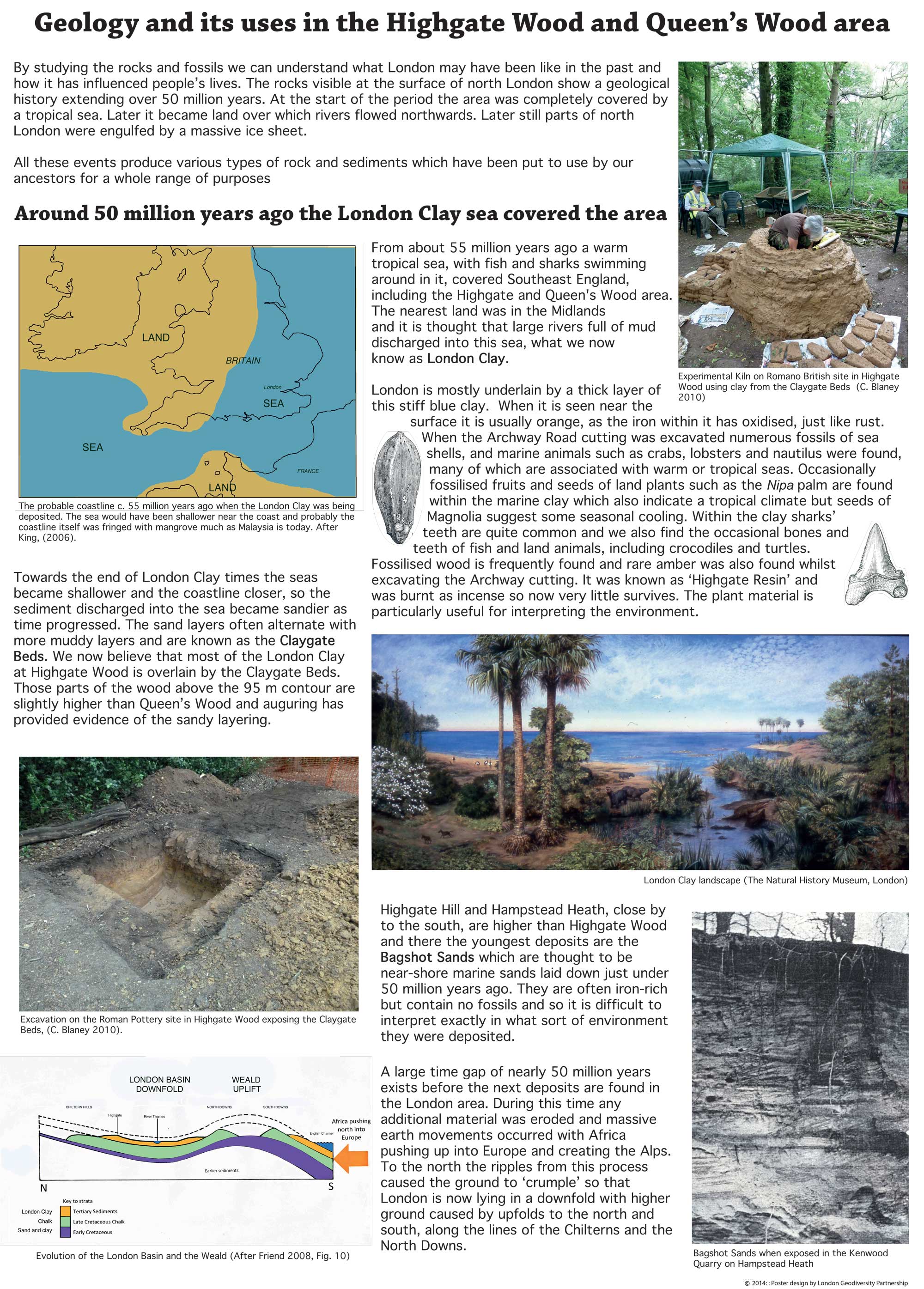 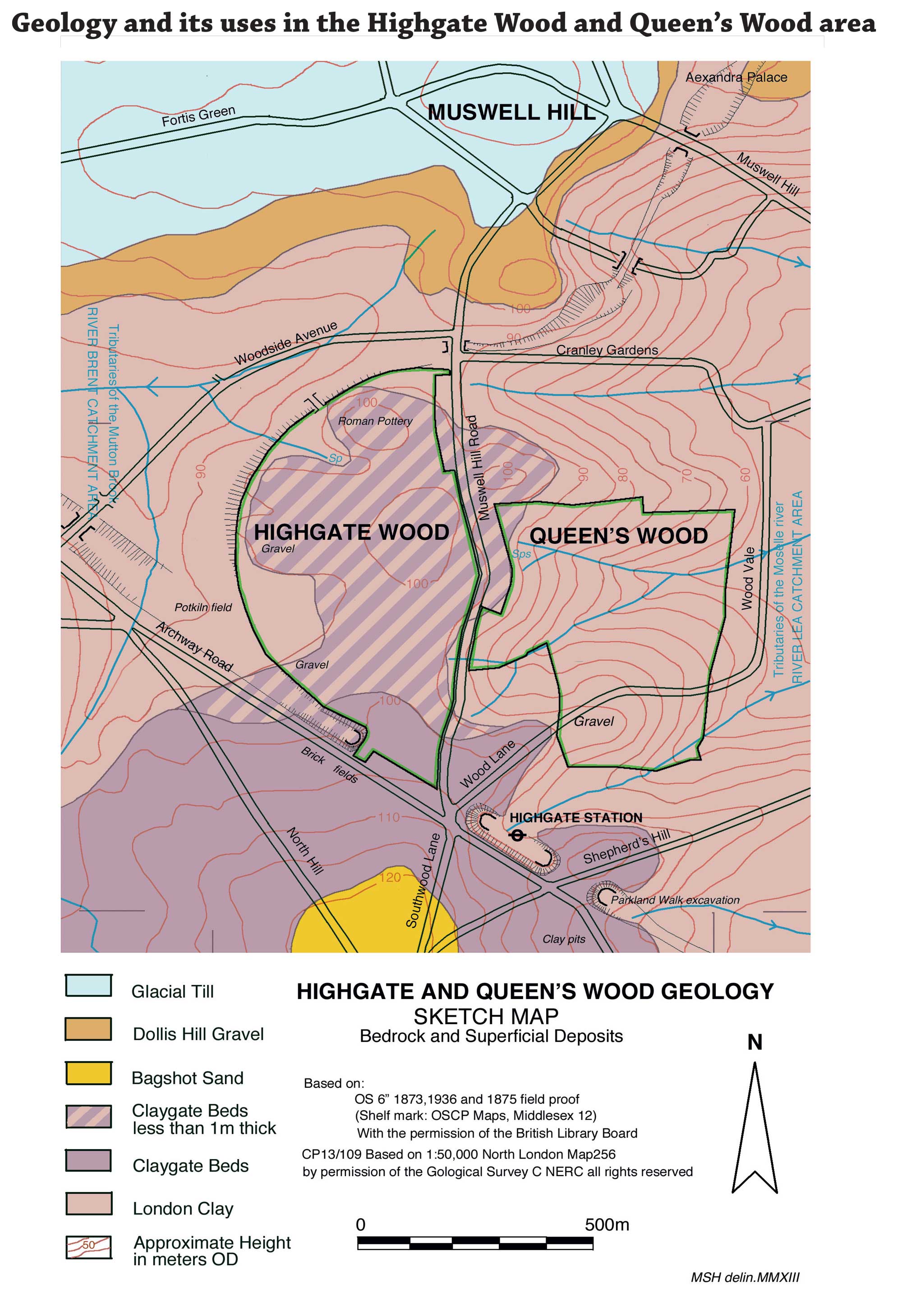 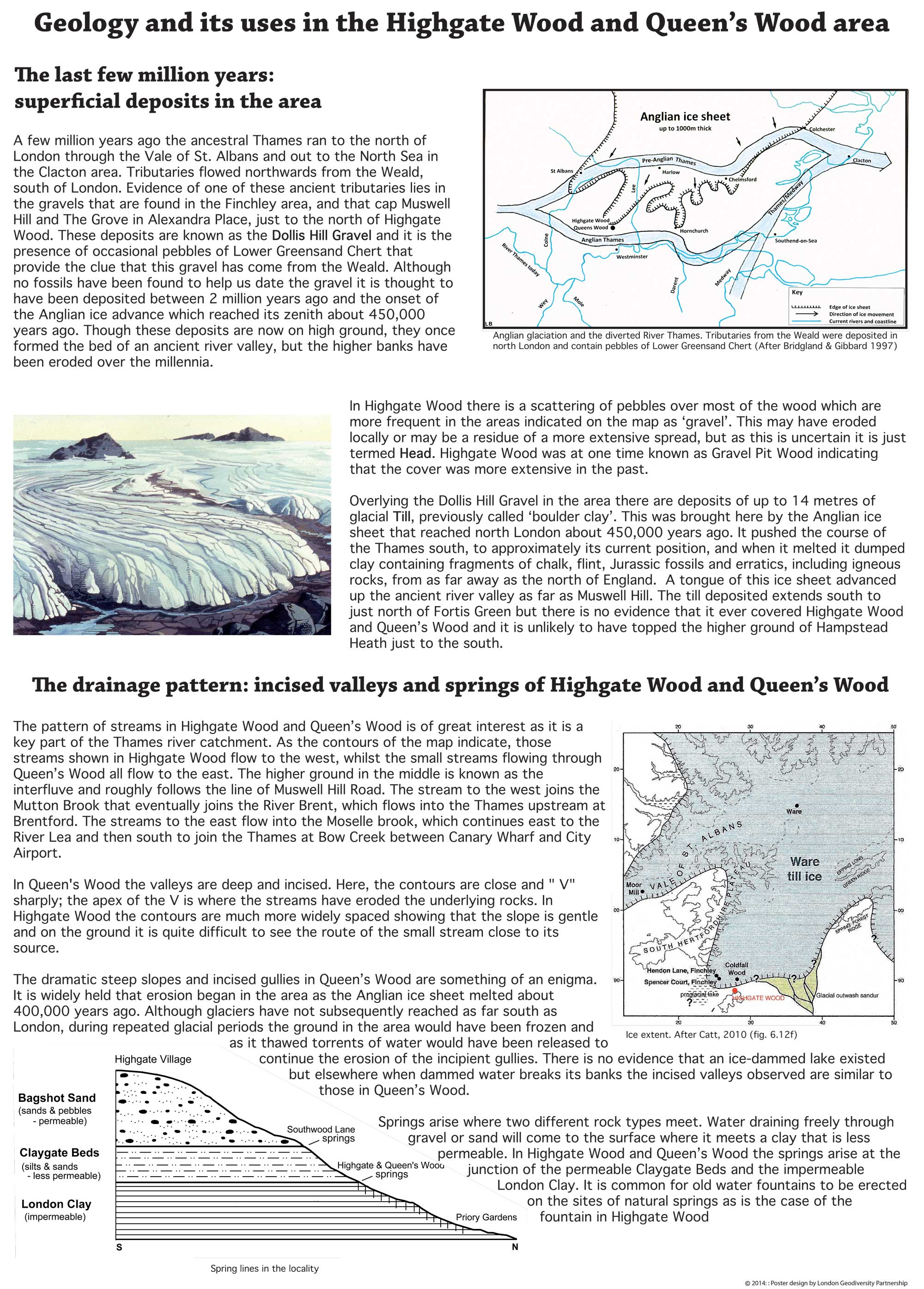 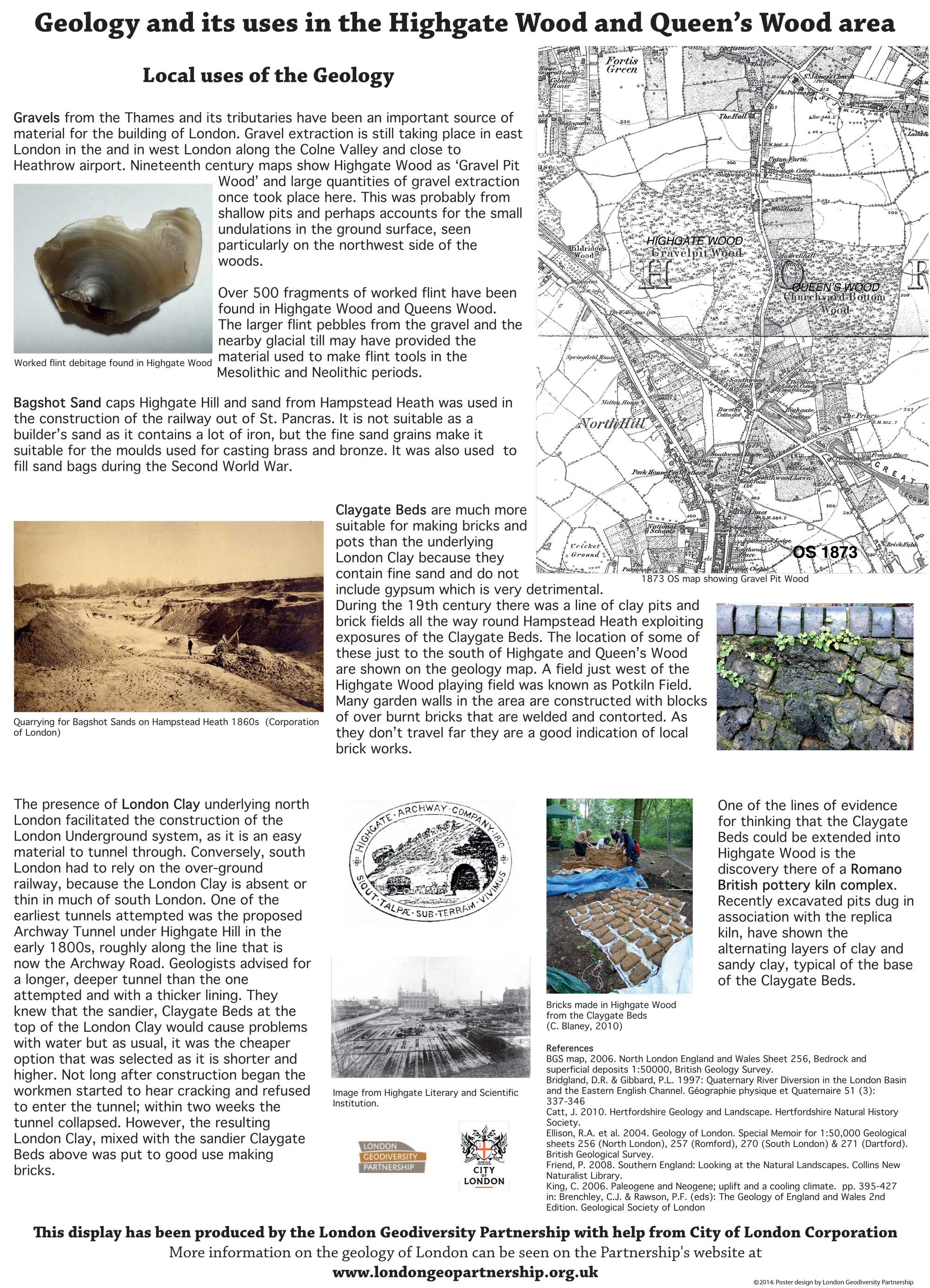 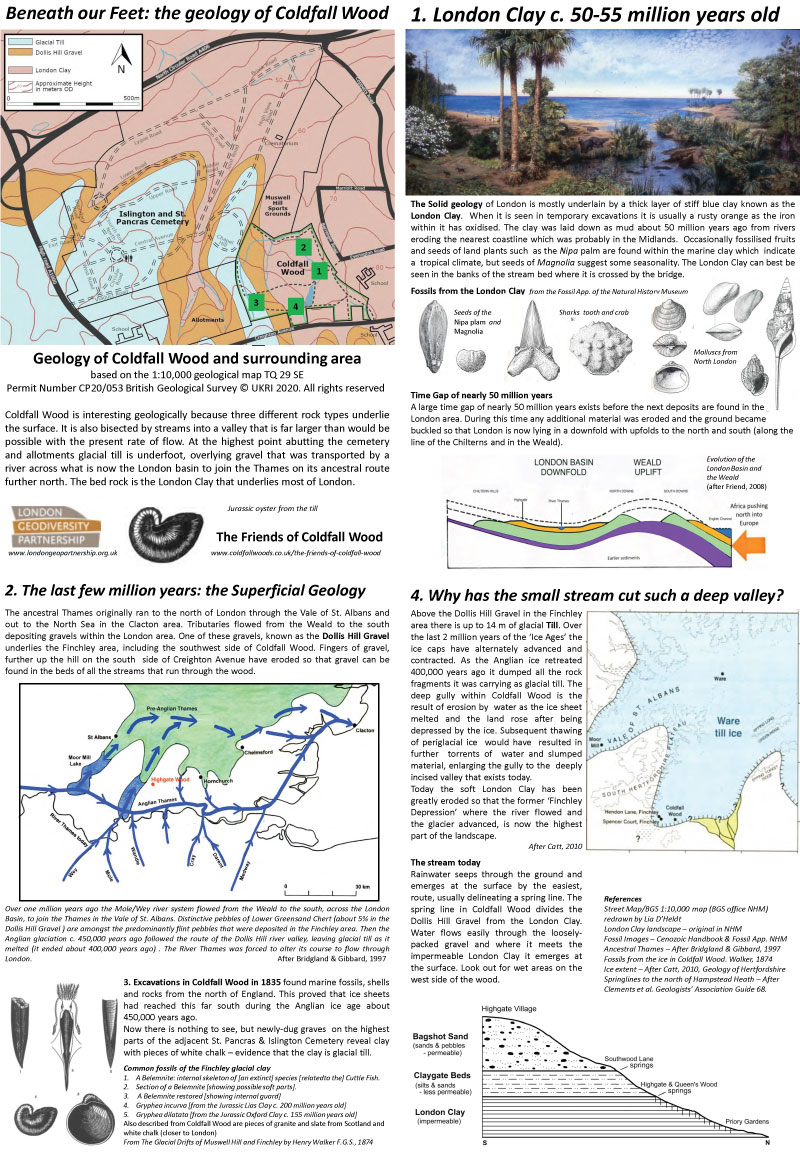